Prince & The Revolution - Around The World In A Day 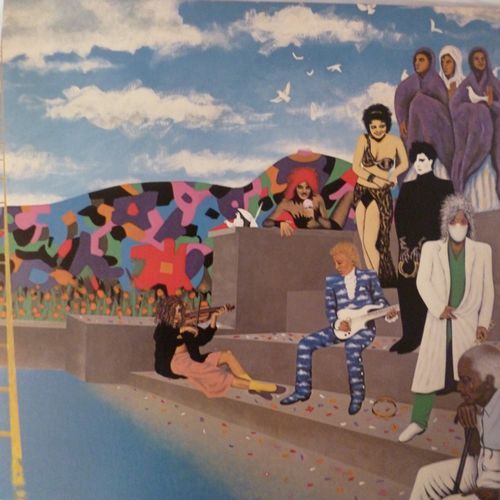 Prince &amp;amp; The Revolution - Around The World In A Day

Prince Rogers Nelson (born June 7, 1958 â€“ Chanhassen, 21 april 2016), known by his mononym Prince, was an American singer-songwriter. He was one of the most naturally gifted artists of all time, and also one of the most mysterious. In the Eighties, at a time when other megastars were delivering an album every three years or so, Prince remained prolific to an almost inhuman degree. His hybrid of rock, pop, and funk, with blatantly sexual lyrics, impacted much of 1980s and 1990s dance-pop music. No other pop star could match the range of his talents, which included not just singing and dancing but also composing, producing, and playing many, many instruments.<br/>Prince had a wide vocal range and is known for his flamboyant stage presence and costumes. His releases have sold over 100 million copies worldwide. He won seven Grammy Awards, a Golden Globe and an Academy Award. He was inducted into the Rock and Roll Hall of Fame in 2004, the first year he was eligible. Rolling Stone has ranked Prince No. 27 on its list of the 100 Greatest Artists of All Time.<br/>Prince's music has been influenced by rock, R&B, soul, funk, hip hop, blues, new wave, electronica, disco, psychedelia, folk, jazz, and pop. His artistic influences include Sly & the Family Stone, Parliament-Funkadelic, Joni Mitchell, the Beatles, Johnny 'Guitar' Watson, Miles Davis, Carlos Santana, Jimi Hendrix, James Brown, Led Zeppelin, Marvin Gaye, the Isley Brothers, Todd Rundgren Duke Ellington, Curtis Mayfield, and Stevie Wonder. Prince pioneered the 'Minneapolis sound', a hybrid mixture of funk, rock, pop, R&B and new wave that has influenced many other musicians.